Download Minecraft Harry Potter Map for Minecraft PE: Let your inner wizard shine, while you explore the secrets of the magical Hogwarts school of witchcraft and wizardry

The Harry Potter series is based on the books by J. K. Rowling. The story revolves around the Boy Harry Potter. Initially, living with his uncle and aunt he could do amazing stuff. But when he turns 11 years old, he receives an invitation to join Hogwarts. That is when he discovers, that he is a wizard and this secret was hidden from him. Then he joins the Hogwarts school of magic to polish his skills as a wizard, under the guidance of the greatest teachers.

Soon harry discovers his cursed fate. As he finds out the reason behind the mark on his forehead. It turns out that, when harry was little the evil Voldemort came to kill him and his family. He killed his father and when he tried to kill harry his mother guarded him. the power of his mother’s love saved him but his fate became tied with Voldemort.

That incident destroyed the body of Voldemort also. Throughout the series, Voldemort tries to get his body back and succeeds. Then harry and company together destroy him for good.

The plot of the Map

The harry potter Map for Minecraft PE will definitely mesmerize you with its exceptional design, very well-detailed locations like rooms, quidditch stadium, secret hideouts, and much more. The main location is of course the Hogwarts castle.

What you go to do is, to find the lever that will reveal the way out. So, the main tiring task will be the lever hunt.

Download Minecraft Harry Potter Map 2022 has many of the locations and rooms that you are familiar with like common rooms, house rooms, classrooms, and many others. 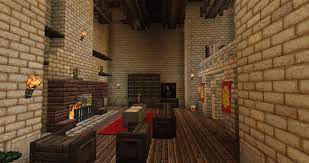 Creative mode gives you the mobility to hang around and check out the detail and beauty of the location. This mood will make you feel like a student and give you the experience of the magical corridors and classrooms.

The more the players the more fun it is to Play Download Minecraft Harry Potter Map 2022. This map can be dull if you go solo. So, bring along friends, as it supports up to 3 players.

You must obey the simple rules while you go out on the quest to find the lever.