Download Minecraft New York City Map: Explore one of the most happening cities in the world in Minecraft PE.

New York is one of the main economic and financial giants in the world with a huge population of a whopping8.4 million. Here you can find so many amazing architectural marvels, even the headquarters of the many world-famous organizations and much more.

Who wouldn’t like to visit such a fascinating city? Now map creators have created a map closely resembling the real New York City that will give you all the taste of the city. So, go ahead and download the Minecraft New York City Map.

Download Minecraft New York City Map 2022 is the creation of a New York-based builder so you can expect so much resemblance to the real city. The most fascinating thing about this Minecraft PE map is that it evolved the game and the builder still maintains it.

Originally created in 2011 on a 256X256 seed, the Download Minecraft New York City Map 2022 still continues to mesmerize players. The design of this map will instantly make you feel like you are in New York. There won’t be any compatibility issues as it works on all the Versions of Minecraft PE.

One of the most prominent things on this map is its small park that has plantations that grow and you will also love the design of the fountain. Another fun feature is its multiplayer support so, bring your friend along for a greater experience. you can also find the church near the park. The builder has done a wonderful job capturing the essence of the New York your visit here will make you want to visit the real New York city even more.

Midtown is the heart of Manhattan, which is the richest and most important area of New York. Wall Street, Empire State Building, and Chrysler Building are very well designed by builders. Midtown has three parts and you can also explore the most important financial buildings of Manhattan in the Midtown Manhattan map for Minecraft PE. 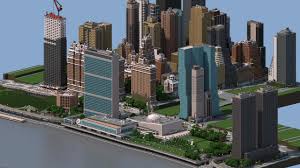 You would love buildings like Reven (Stark) Tower, Grace Building, the Lincoln Building, the Grand Central Terminal, Empire State Building, Chrysler Building New York Public Library, and Times Square Tower. You will be amazed by its distinguished textures as it has its own texture pack. You can get that from the archive of this Minecraft PE London Map along with the map itself.